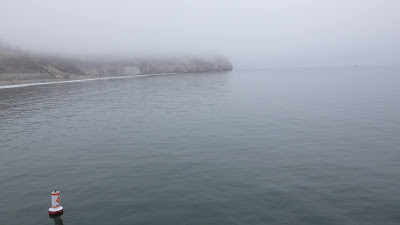 Early Saturday morning Avila Beach had thick overcast that was short of, or too high, to be fog.  The air was 57 degrees and still, the ocean flat and glassy and the surf 1 to 3 foot. The water temperature was 57°.
I had decided to do a big circular route that would be about 1 hour/2 miles and that worked out pretty well. 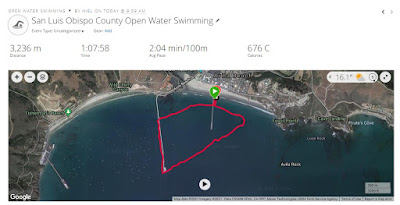 At 9 o'clock Tom Lorish was wading in as I was getting suited up. We both went east down the buoy line but I never saw him in the water. I swam to the last buoy, around the reef buoy, to the end of the Cal Poly Pier, to the second crossbars and back to and in along the west buoy line. 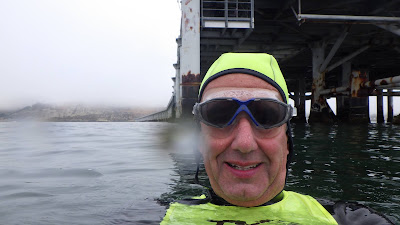 At the end of the Cal Poly Pier.
As I was swimming from the CPP to the buoy line the sun started to break through and the wind to picking up but it didn't amount to anything by the time that I finished.
Leslie, Jodi and Stephanie got in at 8 and did a long swim.
I'll be back tomorrow morning at 7:30.
niel
Posted by Niel at 3:45 PM