I got in at 8:15. There was low clouds or high fog, either way the visibility was fine but there was no sun. The water was glassy and almost flat. The surf was 3 foot. The air temp was 48° and I measured a water temperature of 52.5°. 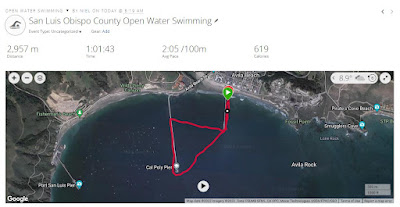 It was cold wading in and cold swimming. The lack of sun was making the water feel a degree or two lower than my measured temperature. Initially I had thought that after I'd hit the end of the Avila Pier the second time I'd swing over to and around the reef buoy and come back to the pier along the buoy line but I was ready to get out. That worked out OK because Tom and I passed each other about half way along the pier.

Tom and I will swim at 9 and 8 as usual on Saturday morning.

No Jodi Saturday because she is out of town in Hawaii, bearing up under the pressure of 78° water.