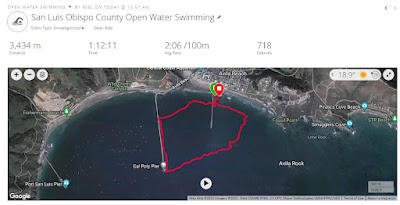 I had a beautiful swim today. Avila was sunny and 70 something degrees with a strong and steady wind out of the west. The water was white capped all of the way in to the surf. I was surprised to measure a water temperature of 53°. I thought that with the wind it would be colder than yesterday. I saw Tiki with the other guards doing their final day of the Lifeguard Academy. I was going to do counterclockwise and clockwise loops around the pier. I started heading west down the swim buoy line and was more comfortable than yesterday so I changed plans to swim out to the end of the CP Pier and coast all of the way to the reef buoy and come back in to the pier. The Start along the buoy line and over to the CP Pier was the roughest part of this swim. The water was very clear and warmer enough that I felt relaxed and comfortable.
I spoke to Tiki at Tower One while she was waiting to begin the final task on the final day of the Lifeguard Academy.  She was going to do a surprise rescue of a 'victim'.
Afterwards it was windy but warm on the beach. I got distracted figuring out which people were going to go home with a case of early summer sunburn.
I'm swimming at 8 on Tuesday.
niel
Posted by Niel at 2:46 PM