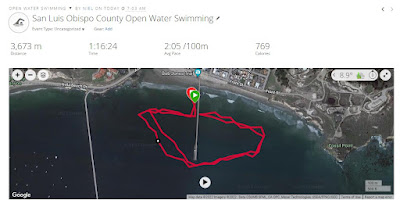 It was sunny, clear and 45° at Avila Beach this morning. There was no wind, the water was 56° and had a nce SW swell running, the surf was small and the water not as clear as it had been over the weekend.

I got in at 7 and just cruised around the swim buoys and the end of the Avila Pier. 56° and early in the day was cooler than mid-day Sunday's 58° but it was still comfortable enough to not have a shock factor when my face hit the water. The swimming was easy but the swell was enough to make each leg different and occasionally bring me back from the far corners of my head to the swimming.

Tom did his solo swim at 9 and texted that he also had a great swim.

My early Thursday morning in person meeting is scrubbed due to too much COVID so unless they switch to ZOOM I'll be getting in at 7.