The numbers lined up nicely this morning, the air was 56° and the water 56.5°. It was still except for a random quick gust which had me thinking that it was going to be windy by noon. There were patches of blue in the clouds and it felt cool but I couldn't tell if it was going to clear or cloud up.  It was clear and windy and choppy at noon. 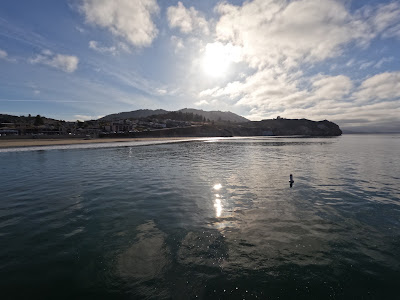 Niel, Jodi and Tiki got in just after 8 o'clock. After a fall from tripping over her cat Jodi's shoulder is bothering her but she planned on swimming today using a hand paddle on her good side and 1/2 strokes on the other.  We started out and left down the buoy line, then to the end of the Avila Pier, to the last buoy on the opposite side and back to the end of the Avila Pier.Jodi and tiki went in from there and I swam to the end of the CP Pier, in to the second crossbars, over to and along the swim zone buoys and in.
Jodi's bum shoulder didn't slow her down a bit. She was even off the front a few times. 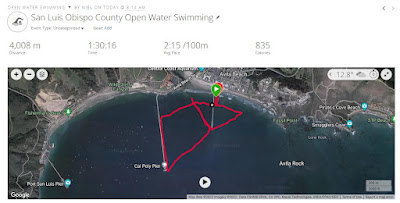 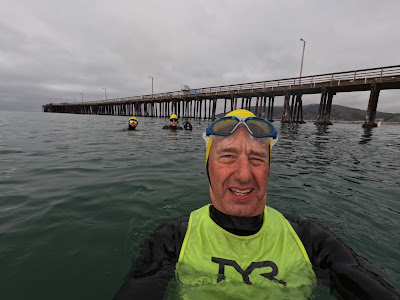 Tiki, Jodi with her hand paddle and Niel just getting started at the first buoy on the left. 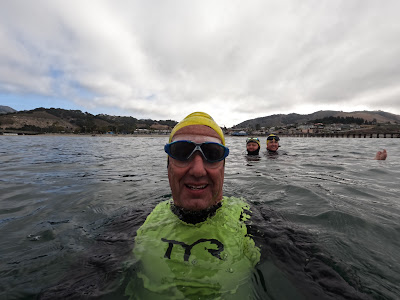 Niel, Tiki and Jodi at the last buoy on the right.
I didn't see Tom but he was probably out there.
I'll swim at 11 tomorrow. Neither Jodi or Tiki will be joining me. We'll see who else shows.
niel
Posted by Niel at 2:24 PM