Brittany and I got in at 8AM. It was clear and sunny with a bit of an offshore breeze. The air temperature was 55 and the water was 51, which was 'warmer' than Thursday's 49 but it didn't feel any different to me.  I wanted to try and swim an arrowhead shaped route that I don't recall doing before. It would be a bit longer than I have been swimming and would have three possible bail out spots if I started getting cold. Brittany planned to swim the same route until she needed to get out. 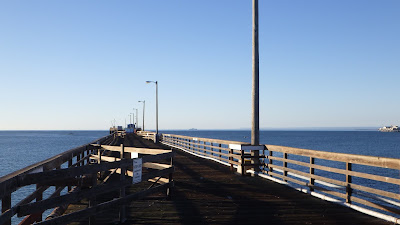 The Avila Pier. In the center on the horizon is the ship that is here
laying fiber optic cable from Grover Beach to the orient. 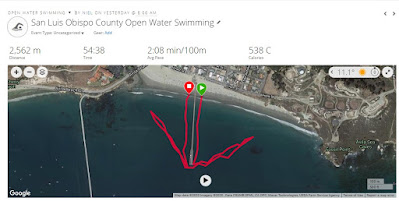 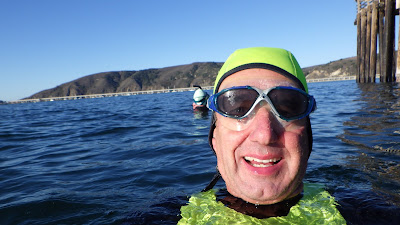 Brittany and I at the end of the Avila Pier.
She pealed off at the end of the buoy line on the east (left from the beach) end of the  buoy line and swam back along the buoys to #1 and got out.
While I was at the showers I saw Theresa and Grace nera the mouth of San Luis Obispo Creek getting in with a kayaker. They were planning a long swim, possibly to Bird Rock.
As I was picking up my stuff Leslie was getting in.
niel