Sometimes your are glad that the weatherman is wrong.

John Lindsey's forecast predicted strong to gale force offshore winds developing late Saturday and continuing through Sunday. Offshore winds will push the water temperature down so I was trying to be prepared for supper chilly water this morning. Fortunately for us the winds were mild and the water temperature Sunday morning was still 51 degrees. The air temperature had dropped to 40 and the surf was up with some occasional 4 to 5 footers. There was a light offshore breeze that kept shifting direction.

Swimming at 7:30 this morning were Duke, Brittany and Niel. We decided to do a triangle that began and ended at the end of the Avila Pier. Instead of stopping at the buoy line I'm liking swimming directly to the end of the pier because it takes about that long for the shock and awe feeling of the water on my face, hands and feet to become just cold. 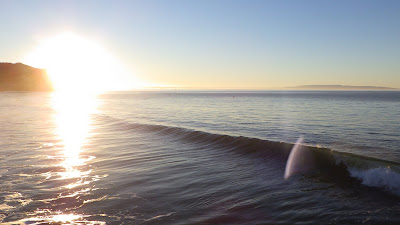 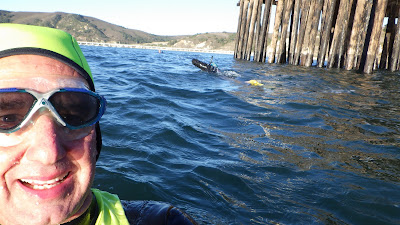 Niel, Duke, the far background, and Brittany, at the end of the Avila Pier and starting to the last buoy on the west side.
When we got out Theresa was getting ready to get in. They had a good swim yesterday and she was totally beat but was back this morning.
I'll swim at 9AM on Tuesday.
niel
Posted by Niel at 10:57 AM