Well, the penguins didn't show up but I would not have been surprised to see them on the beach this morning. At 7:30 the water temperature was 50 degrees and the air temperature was a chilly 32 degrees. Other than that it was the same beautiful fall conditions that we have been enjoying for several months; sunny with a mild offshore breeze and 2+ foot surf.
Niel, Sue, Leslie and Amy Heap got in at 8:00. Amy swam with us when she lived in San Luis Obispo. She and her family now live north of Seattle. She has been swimming (bareback) in the sound there where air and water temps are similar but it is cloudy and rainy, so they were enjoying the sun. 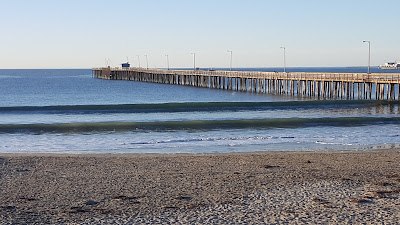 For me the the air didn't seem to make much difference except that my feet never got numbed to the water and just became colder, so I made due with a lap around the pier.  I might have spent too much time barefoot on the cold sand before getting in.....
Sue swam over to the Cal Poly Per, back to the end of the Avila Pier, on to the end of the 'buoy line' on the east side of the Avila Pier and back to the start. This was about 1.5 miles and Sue swims bareback.  So does Amy. She and Leslie swam together and I didn't see where they went but they got out just before Sue. 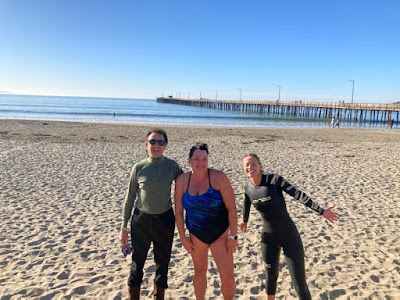 Niel, Amy and Leslie
Duke and I and anyone else who shows up will swim tomorrow morning at 7:30.
Amy and Sue are going to swim sometime on Monday.
I'll swim on Tuesday at 8. I think that Amy will join me.
niel
Posted by Niel at 11:21 AM