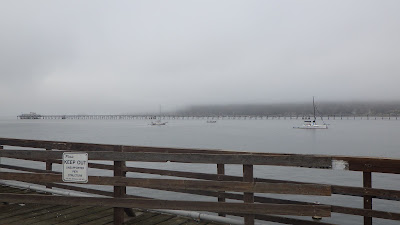 Nothing special to see in the water today. No seals, dolphins,birds or sea monsters, just dense overcast and a hint of a SE swell. The air temperature was 59° and the water was a comfy 62.5°. There were some warm spots out there that felt several de]grees warmer. 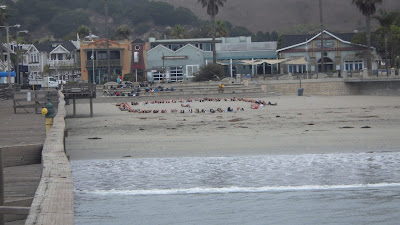 The Cal Poly swim team was on the beach doing some dry land workouts. 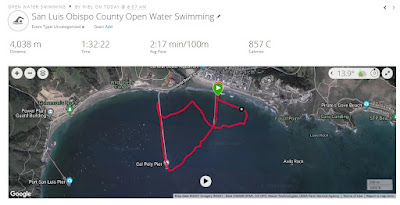 In the water today with Group 1 were Jodi, Leslie, Stephane, Tiki and Niel.
Group 1went over to the CP Pier and swam to the first crossbars, then back to the second crossbars, to the last buoy at the creek, to the end of the Avila Pier, around the reef buoy and back along the buoys to our start and in.
Group 2 was Tom was Sue who swam back and forth between the Avila and Cal Poly Piers. 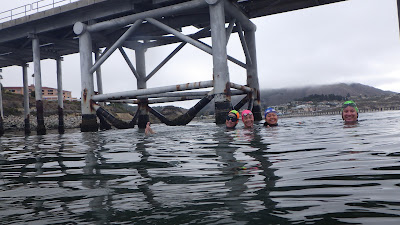 Jodi, Leslie, Tiki and Stephanie at the first crossbars. 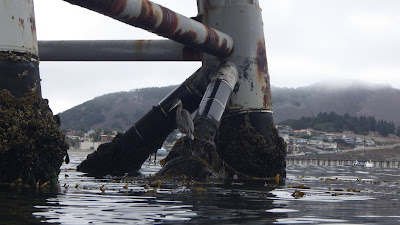 When we stopped at the second crossbars before heading to the creek this heron was already in possession and was giving us the stink eye so we crossed under the pier at the next opening.
We'll swim tomorrow at 11.
niel