It was just another dull morning in the sleepy Central Coast beach town of Avila Beach. No one had any idea what terror was about to over take this idyllic setting. It was gray and overcast with fog coming and going, hiding who knows what terrors of the deep that were lurking out there, waiting for unsuspecting swimmers to venture out over the great depths of the ocean. The air and water temperatures were 61° and the water was flat and clear, the better to see something coming.

Niel, Tom and Duke were joined by Sue who is in town for a few days. She will be swimming Friday and Saturday mornings. 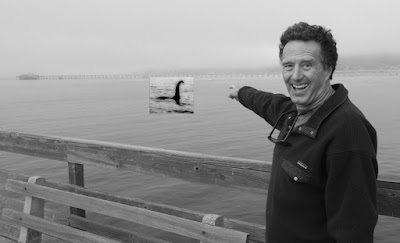 While I was out on the Avila Pier checking the water temperature I saw what was surly Nessie, The Loch Ness Monster in the waters over near the Cal Poly Pier! Some stray radiation from Diablo Canyon must have attracted this famous sea monster to the Central Coast. This looked so real I could not believe my eyes! 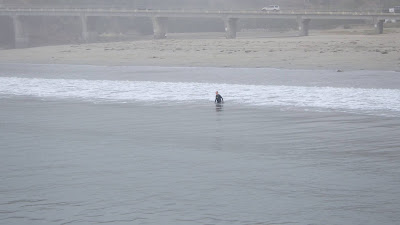 Duke would not be intimidated and set out on his own to do a U Bruner sprint and to spit in Nessie's eye as he went by.
Tom and Sue got in before me. I do not know where they swam but I saw Sue when I had gotten out and she said Tom was 'gone'. I couldn't bring myself to ask if she meant that Tom had had gotten out earlier and was on his way home or had been part of a sea monster buffett. 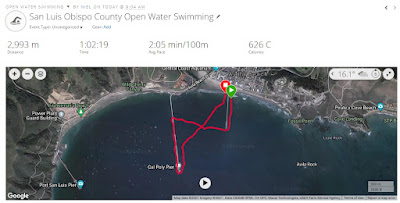 I felt compelled to swim in a large X pattern,
marking the last known location of Nessie and Tom. 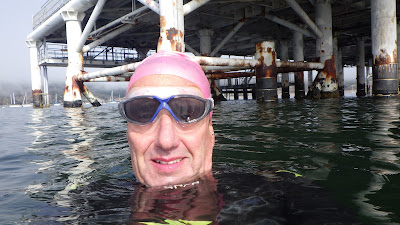 Me at the end of the Cal Poly Pier with no sea monster in sight.
Maybe it was my pink cap that kept me safe?
Leslie's Wednesday Evening Swim Report -
Me, Jodi and Tiki jumped in and went 4th creek buoy, around the big catamaran moored out there, there was no one home so we continued around the Avila Pier to other 4th buoy, back to 1st and in.  Water was nice, clear but smelled a little funky still to me at the creek buoy.  No seals!!

Beach was pretty empty, tons of parking and no lifeguards.   We're going to keep the wed evening swims going as long as we can until daylight savings.    Everyone is invited anytime!
I believe that they meet at the lifeguard tower on the left side of the pier and get in the water at 5:00. They will continue evening swims until the time changes on November 7th.
No sea monster is going to keep me out of the water! I'll be back Saturday morning. I think that I'm going to Farmers so I'll be at the beach at about 9.
Sunday's swim will be at 11. Should be no crowds.
niel
Posted by Niel at 3:52 PM