Thick fog this morning, I couldn't see the end of the pier from the shore, but there was enough vis to swim. Duke and I had morning appointments so there wouldn't be any two mile routes today. We'd both do his U-Burner sprint route of about 1200M, three legs, out, over and in with a bit of a break at the corners.
The air and water temperatures were 59°. It was very gray with a steady breeze out of the south that was pushing up a strong onshore current and chop.  It would be a contest to see who could keep the straightest route in these conditions. We both got pushed around a lot and have a odd jog to the right at the end of the pier.  I was trying to stay on Duke's feet coming past the end of the pier but every time I lost his bubbles he was way off to the right or left. I think that it was both of us.
We spoke to Tom as we were getting out and he in. Later he texted that it was double chop and churn out there. We all had a lot of fun. 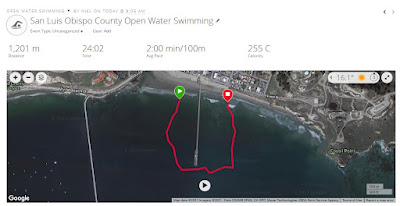 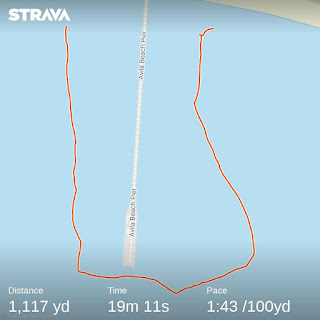 Duke
I think that the contest is a tie and the ocean won.

The Wild Women will swim tonight at 5.

Duke and I will be back on Thursday morning at 9:30.