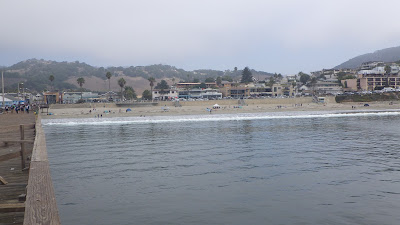 There was not yet much in the  ways of a crowd but the beach would fill up by 1. 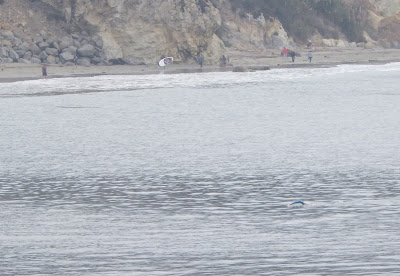 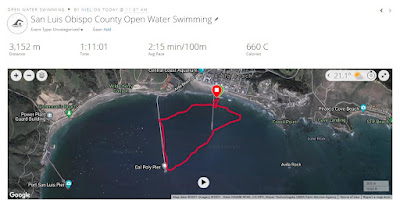 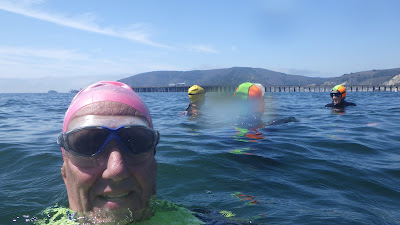 Niel, Leslie, David and Jodi at the last buoy at the mouth of San Luis Creek
Along the buoy line it was getting choppy. It was bigger on the way over to the CP Pier and pushing back hard on the way out along the pier. 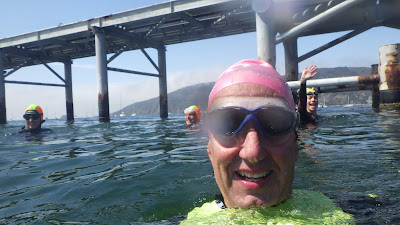 Jodi, David, Niel and Leslie at the second cross bars along the Cal Poly Pier.
Leslie is not waiving at the camera but trying to discourage a seal who was checking us out. 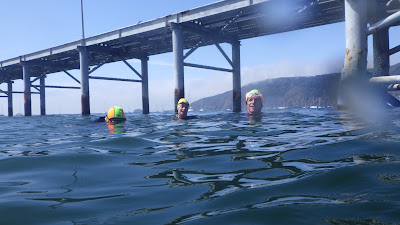 What is Jodi looking for?
After we rinsed off we had a put lunch on the beach with mellons, grapes, broccoli salad, cake, brownies, kettle corn, and carrots. There were plenty of nice calories and no food group was left out.
I'll be back on Tuesday morning at 8. I do not know if Duke or anyone else will be joining me.
Sadily, I need to mention that Jerry Gross died recently. He was a Avila Dolphin going back to the 1990's.
niel

I am SO SAD to hear this news! Jerry was a nice man, always had a positive smiling attitude and he was a strong confident swimmer. I knew him mostly from the Kennedy pool. I am so sorry for his family and friends He was a ray of sunshine at the pool and he will be missed Jerry, you're with the dolphins now and we see you out there. Leslie