It was just lovely today. At 11 o'clock the air temperature was 71° and the water was 61.5°. The Is was not windy at Avila Beach but offshore it had picked up so there was a chop and current out of the SW. The surf was small with an occasional 3 footer. The water was a nice green today.
Duke had arrived early and had seen Maria and Heidi get in at 8, Paula and a couple of friends get in next and Tom and Sue get in at about 9. There was a solo gentleman really banging away along the buoy line with a dolphin swimming cover while we were getting ready. The 11 o'clock group was Duke, Leslie, Jodi, Pat, Niel and we were joined by Roshan from the Bay Area. Roshan swims open water at home and was having wetsuit problems so she decided to go bareback. 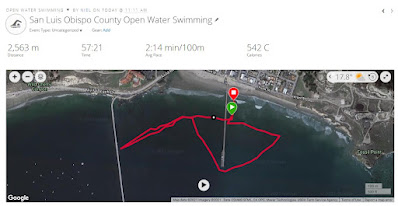 The group all made it down the buoy line and to the end of the Avila Pier. Between there and the buoy at the mouth of the creek Pat went somewhere, I didn't see him at the group up at the buoy. Duke and Roshan went in while the rest of the group headed to the second crossbars on the Poly Pier. I turned around there while Jodi, Leslie and Pat wet to the third crossbars and back to the end of the Avila Pier before coming in. 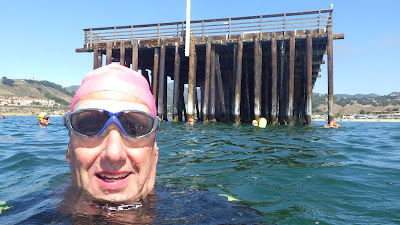 This is Jodi with Leslie behind her, Niel, Duke, Pat and Roshan at the end of the Avila Pier.
Duke and I will be back at 8 on Tuesday. It sounds like this week's Wild Women In The Water evening swim will be Tuesday at 5.