Avila was pretty much the same as it has been early in the morning; grey and cool, except that there was already a chop out of the SW and the water temperature had dropped 3° since Tuesday to 60°. 60° is pretty warm for Avila Beach but I was expecting 63° water like last Tuesday so it took some mental jujitsu to get comfortable with the cooler water.
I was going to do a long and short sid triangles but when I got to the end of the Avila Pier there was a large raft of pelicans and gulls on the left/long side of the pier so I started on the short side. When I returned to the end of the pier the birds had moved on so I continued on to the long side, came back to the end of the pier for the third time and came in along the west side.
I should have bought a lottery ticket today because my distance was an even 3,200M.
Duke is still in recovery mode after the Santa Barbara Aquabike so I didn't see him. I saw Tom as I was leaving. He got in at 9 and had been over to the Cal Poly Pier and beyond, circling through the boats that are anchored on the west side of the CP Pier before coming back. 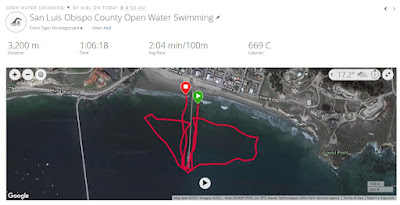 I'll be back on Saturday at 8, or 9 if I go to Farmer's Market.
Sunday we'll swim at 11 and there will be a Labor Day Potluck Lunch afterwards.
niel
Posted by Niel at 5:36 PM