Ick. It was 59° in Avila this morning but it was drippy wet and felt chill. The water was still 61° so that was a plus. Mr. Lindsay had predicted that there would be rip currents along the coast and sure enough, there was a big one on the left side of the pier. There were occasional 3+ foot waves and a swell out of the SE, which is typical of a storm. There was some extra power in the water with the foam doing a better job than usual of trying to push me over. When I was swimming I could feel a deep movement in the water. Perhaps our first hint of winter?

I was on my own today. Duke texted me that he was too comfortable with his coffee to get up out of the chair and come swim and would ride to Cayucos later. Gezzz, was he drinking decaf? I wonder if there was a double chocolate Costco muffin next to his coffee cup? We miss ya buddy. 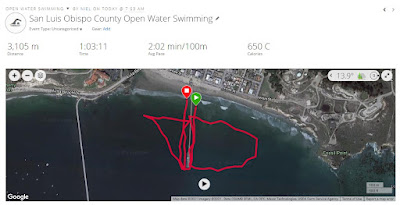 I just went out and paddled around and got my hour in. The water is clean but there is a lot of broken up kelp everywhere. If I remember correctly that is a late summer thing.
Tom was walking down to the suds as I was getting out so we talked for a bit, wondering if one of us should go check on Duke to make sure that he didn't fall asleep in his chair, spill his coffee and miss out on his bike ride.  😉𝨝
I'll be back Thursday between 8:30 and 9.
niel
Posted by Niel at 11:07 AM