The swimming today was beautiful but colder. The air temperature was 57° and the water was 59°. I hate to think that after a few days in the 60's we may already be sliding back into the 50's for the duration of the season.

Niel, Jodi and Leslie swam over to the Cal Poly Pier. Leslie had been cold before she got in and that usually doesn't get better once you are in the water. She turned back from the end of the CP Pier while Jodi and I swam to the FIRST crossbeams and doubled back to our starting point at Avila Beach for 4,122M. 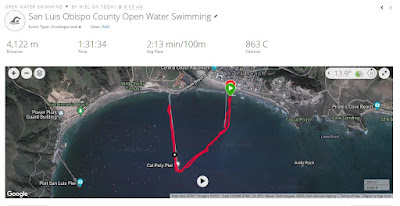 From the first crossbeams to the end of the CP Pier is 900M. If there hadn't been guys fishing from the rocks at the base of the pier I would have gone in and touched the rocks for a complete lap of the pier and about 1000M each way. 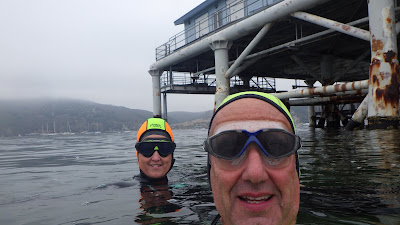 Jodi and Niel at the end of the Cal Poly Pier. 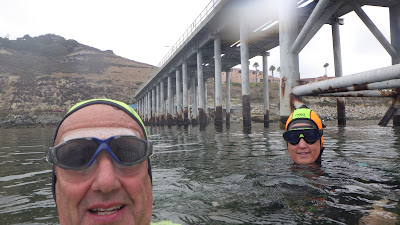 Niel and Jodi at the legendary first crossbeams.
Jodi, Niel and Leslie will swim tomorrow at 11 and have a potluck lunch lunch afterwards. Find something to bring and join us.
niel
Posted by Niel at 11:31 AM