Niel, Jodi, Leslie and Tiki swam at 8:05, Stephanie got in later, started on her own, never found us and joined up with Tom when he got in at about 9.  The air temperature was 55° and the water was 59°. It was nice and flat and calm. The fog and low clouds had visibility down to 3/4 to 1/2 mile. I felt kind'a chilled before getting in and had to not think about getting cold during the swim. 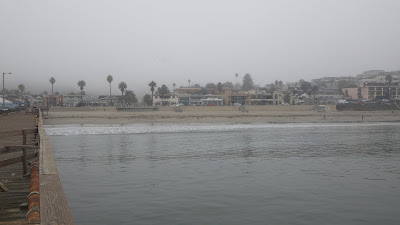 Avila Beach from the pier. It will be nice when we get more into
the fall and no longer have morning fog and low clouds. 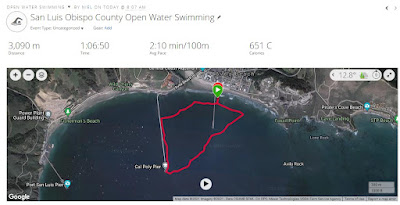 We swam a big 'circle' which was more of an irregular quadrilateral.
That is the geometry lesson for today. (I had to Google it) 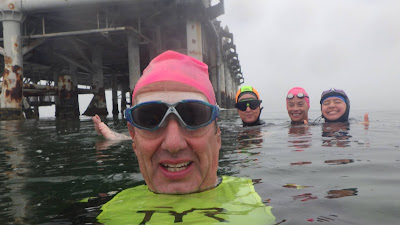 Niel, Jodi, Leslie and Tiki at the end of the Cal Poly Pier.
Duke, Jodi, myself and whoever joins us will swim in the sun tomorrow at 11.
niel